In the United States alone, 500 thousand vasectomies are performed every year. Couples often choose vasectomy as a means of birth control. They prefer this operation because it is safe, effective and can be performed using minimal techniques. 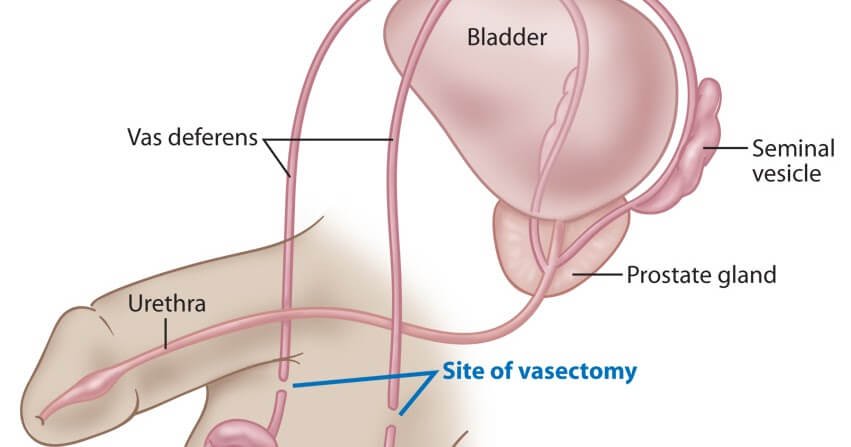 What can be achieved with a successful vasectomy?

If a vasectomy is performed in a proper way, it interrupts the flow of the sperm from the testicles to avoid unplanned pregnancy. The testis is the sperm producing organ in men. They are located in the scrotum. Sperm cells are produced in the testicles and are stored within the epididymis which is adjacent to the testicles. Then sperm is transported through the vas deferens, through the prostate gland, and seminal vesicles for further ejaculation.

What vasectomy does, it interrupt vas deferens and prevents sperm from entering in the ejaculate.

There are a couple of key points that must be considered before planning a vasectomy:

Vasectomy is a permanent procedure

That is, once you performed a vasectomy, there is no way back. Couples who consider vasectomy must come to terms with a desire to have permanent birth control. If there are any reservations as far preplanned birth is concerned, vasectomy may not be the right choice.

While it is theoretically and clinically possible for a vasectomy to be reversed, it is a very complicated and very expensive procedure. The reversal procedure is also rarely covered by insurance and is effective in only about half of the cases.

Vasectomy is not perfect

Another thing a couple needs to take into consideration is that vasectomy not perfect. It ios an effective means of birth control land has numerous advantages over nonpermanent forms of birth control, but failures sometimes occur. Such failures are extremely rare and can be detected via the proper follow up with your doctor.

This procedure consists of the two semen analysis after the vasectomy is performed. The semen ejaculate is analyzed in a laboratory to confirm the absence of sperm.

Methods of performing a vasectomy

There are several ways to perform a vasectomy. Generally, the procedure takes 15 to 30 minutes to perform. It can be performed either in the urologist’s cabinet or in the surgery center.

Usually, it is performed under local anesthesia and occasionally under sedation.

This is performed usually in the form of a valium pill. This is administered usually 30 minutes to 1 hour before the start of the procedure, or it can be administered into the vein of your arm.

Although you may stay awake, the medication will significantly help you relax.

After the anesthesia is given, your doctor will identify vas deferens on each side of your penis and will bring them to the skin surface through either puncture or small incision.

Then, the vas deferens tube is interrupted either by removing a segment or burning inside of the tube or else, placing clips on the end of the tube. It also can be a combination of each of these.

Your doctor may also decide to send segments of your vas deferens to a pathologist to confirm removal.

It ios also recommended stopping at a local pharmacy to fill the pain medication prescription on a way home. The local anesthetic injection typically wears off between 1 and 2 hours after the injection. Pain medication is to be taken prior to that time.

What to do after the procedure is performed:

No matter how minor, all procedures carry some risks. While vasectomy is very safe and effective, there are risks that should be carefully considered.

Take care of the following:

The results of vasectomy

If proper healing occurs, and the flow in vas deference is interrupted, sperm is continued to be made in the testicles but is reabsorbed and recycled in the body.

Vasectomy does not affect your erection, your sex drive, or your ejaculation.  Sperm that travel; through vas deference makes up only a small amount of overall fluid that is involved in the ejaculation. There is no noticeable difference in the ejaculate before and after vasectomy.

After carefully researching and considering vasectomy as a means of birth control, you and your partner feel like you want to proceed, then few small steps and preparation may make the process easier.

Why there is still information on the connection between vasectomy and prostate cancer?

While there is always a hypothetical risk of a relationship of vasectomy to prostate cancer, there is no even minimal evidence that would support such connection.

The reasons for such rumors may be the following:

Some studies performed recently were trying to look into a connection between the vasectomy procedure and death caused by prostate cancer. These studies were performed during twenty years. The results showed that men who performed vasectomy had a slightly higher death rate than those who did not.

However, what is known as the absolute risk was very low (only 0.2 percent increase.) These numbers were further corrected when screening for cancer was taking into consideration. As a result, extra risk turned out to be even smaller.

Considering current studies, men so not need to worry that there is an increased risk of prostate cancer from vasectomy procedure.

Recovering from the prostate surgery is a process that requires patience and rehabilitation measures. Studies showed that post-surgery patients should not only wait for their erectile function to restore itself gradually as the tissues heal, but also work on their progress. The problems of poor blood circulation and consequent low oxygen supply in the penile tissues will follow the surgery and, without the needed rehabilitation, may cause secondary damage to the cavernous tissue. Viagra is proved to be effective rehabilitation treatment after the surgery on the prostate gland.
Prev POST
Next Post
Read More